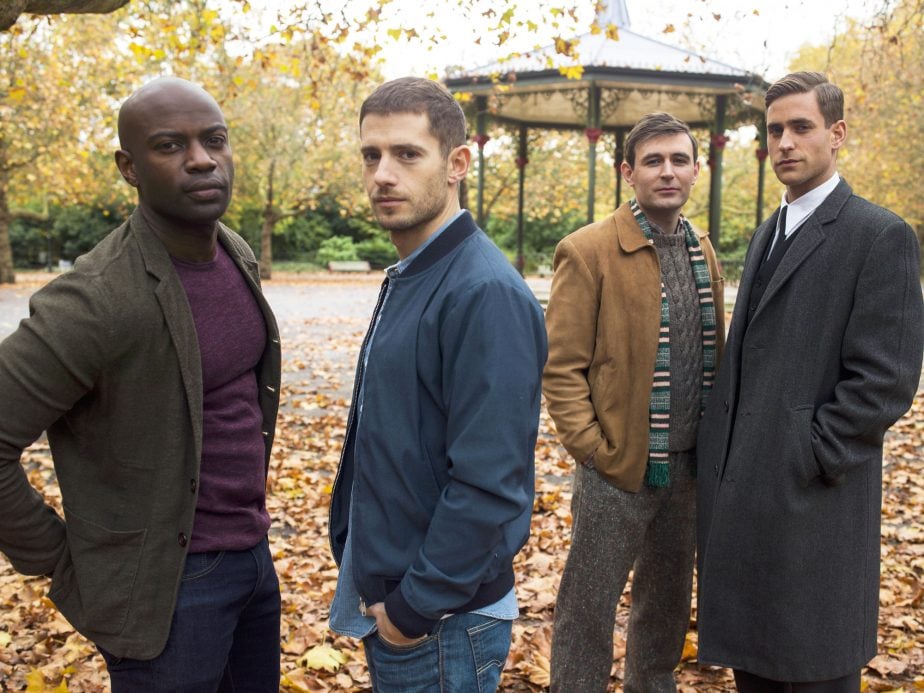 With the second and final episode screening on Monday on BBC2, Man in an Orange Shirt tells the wrenching story of illegal love between Michael and Thomas and the sadness it causes.

The consequences of so-called criminal behaviour broke many of those who were prosecuted. It also explores the anger of a wife duped into a marriage that could never fulfill her.

Take a look at the trailer here.

Filmed in autumn last year, London had a supporting role in the two-parter set in both the Forties and modern times.

The Charterhouse in Islington plays a 1950s prison, where five key scenes were filmed involving 45 cast and crew.

Michael queues outside the prison gates with other visitors. Then, Thomas leaves prison, greeted by well wishers before leaping into a taxi.

Lonsdale Square provided the basement flat for scenes filmed over two days in October, with a donation made to local residents.

In Camden, at Victoria House on Bloomsbury Square, Michael climbs down from the bus and pulls out an A to Z. Around him the street is busy with other demobbed soldiers and wives.

We also see Robert climbing to the top deck of a bus, with Flora and Michael following him.

And another scene in which Thomas stands outside a department store, blowing Flora a kiss, who’s looking down from the top deck, as a bus pulls away

Also in Bloomsbury, Michael hesitates outside a gents underground toilets and then continues toward them.

Characters use the Theobald Road and Gray’s Inn Road crossing. And more Camden scenes were filmed inside The Duke pub on Roger Street.

The courtroom scenes were filmed in Kingston’s Surrey County Hall with 65 cast and crew, and a key driving scene in Kingston was shot along Portsmouth Road, Ewell Street, Ditton Hill Road, Victoria Avenue and Balaclava Road.

FilmFixer manages the film office service for Islington, Camden and Kingston councils. FilmFixer director Andrew Pavord says, “It was a pleasure to play a part in helping London participate in this exploration of its own sad history.

“In particular, it was great to see the historic Charterhouse involved in the role of a prison for the drama, highlighting the versatility of London’s modern and period locations, and the way in which Londoners are happy to welcome filming.”

There’s more information about the production here on the BBC website.