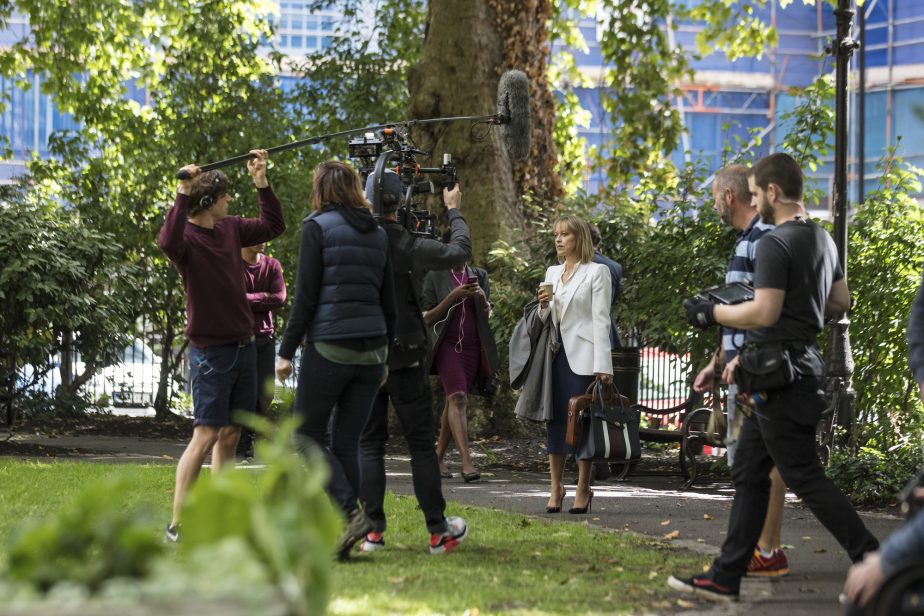 It starts on April 24th at 9pm. Here’s the trailer.

The series filmed last year across Kingston, Lambeth, Lewisham, Haringey and Southwark, as well as using the authenticity of Holborn in Camden for its legal office locations.

FilmFixer manages the film office service for all these councils.

FilmFixer director Karen Everett explains, “Being set around a family of lawyers, the script called for extensive courtroom scenes.

“Managed by Surrey Film Office, it’s a great location with plenty of room for a big cast and crew, and in the relatively quiet locale that welcomes filming.

“The accuracy to detail continued with law offices in Camden. Nicola Walker’s character has controversially left her family’s firm to join Noble & Hale, set in a building on High Holborn. Filming took place over the course of about a month from June to July, with more filming in September.

“The scenes filmed here include Nicola Walker as Hannah heading inside past a gaggle of reporters and ducking into a side street to shed a tear.

“Around the corner in Red Lion Square Gardens Hannah and a colleague eat lunch on a park bench.

“Nicola Walker, as Hannah, lives in a home on Macaulay Road in Lambeth, with her husband Nathan, played by Stephen Mangan.

“Their household scenes were filmed over about a week.

“The family home where Hannah grew up hosts a wedding reception among other scenes in the show. This was a home in Sydenham Hill Lewisham, where the production filmed for a week in October.

“The Kings Head pub in Crouch End Haringey features a stand up comedy routine in the show.

“In Canvey Street in Southwark, Fiona Button as Hannah’s sister Rose waits for her fiancé James, played by Rudi Dhamalingam.

“And in almost obligatory shot these days, we see Hannah crossing the river from Southwark’s Bankside.”

Nicola Walker has said she didn’t necessarily take to the legal power dressing for the show like a duck to water: “Abi [Morgan] refers to it as putting on her armour for the day.

“It’s a real departure for me personally, I do not possess any of those clothes in my wardrobe! I made an astonishing discovery that when I wear anything that isn’t a trainer or a welly, when I’m put in high heels, I have an ability – and it’s a real skill – to clip the back of my heels and send a beautiful high shoe flying into the air.

“There are so many outtakes of Jess the director shouting ‘Cut! Her shoe’s come off again…’ – you’d see it flying over the heads of the crew. It must be about the way I walk. It took me three weeks to master it.”